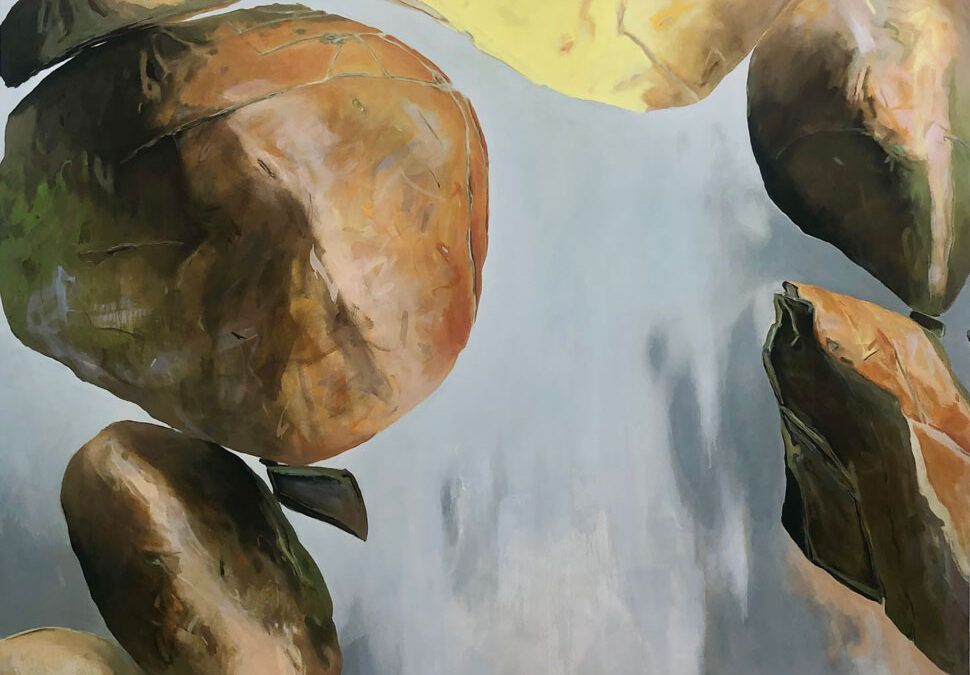 Where We Stand, solo exhibit at Hosfelt Gallery 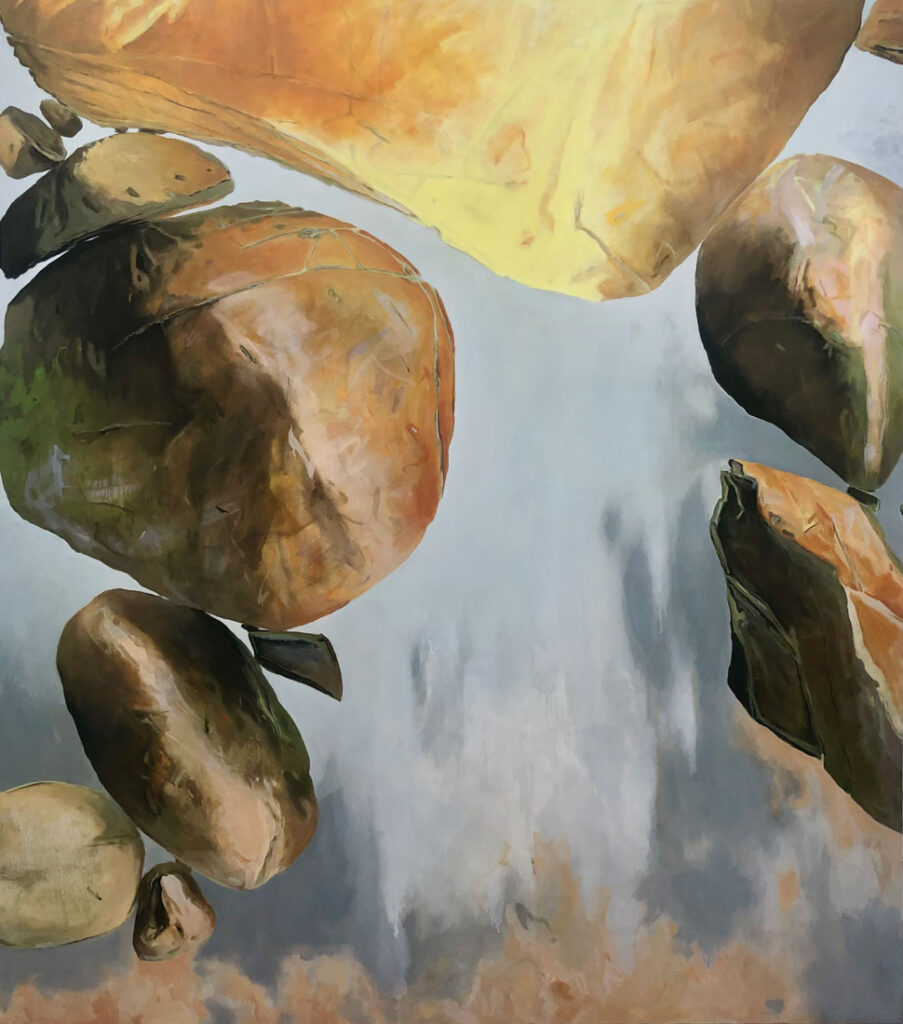 In her debut exhibition at the gallery, Judith Belzer presents her newest series of paintings developed over the past 3 years. The unusual protagonists in this body of work are rocks, ranging in size from diminutive to massive and hovering in precarious relationship to each other, to the ambiguous spaces they inhabit, and to the viewer.

Top-heavy and improbably balanced, the risky equilibrium of these boulders threatens imminent collapse, and the perspective is disturbingly uncertain. Do they tower above us? Or are they crashing below us? The atmospheric hues at times veer towards the synthetic, implicating our human ingenuity in the hazards of this terrain.

The series is titled “All That Is Solid” – a reference to Karl Marx’s infamous quote from The Communist Manifesto:

All that is solid melts into air, all that is holy is profaned, and man is at last compelled to face with sober senses, his real conditions of life, and his relations with his kind.

The unreliability of the ground beneath our feet is the epiphany one has upon experiencing an earthquake for the first time. Now this feeling of instability has become the most banal aspect of daily life, as we navigate the social, political, environmental, and health upheavals of the last several years.

These paintings encapsulate the terrible beauty of the sublime. Early in the series, the boulders appear to be the jagged product of violent cataclysm, jammed and jostled together like the figures in an epic history painting. As the series evolves, the rocks become more singular, monumental, and ancient, as though rolled smooth by the slow advance of glaciers or burnished by the tumble of constantly moving water. They lean into each other, interlocked, supporting each other, mutually interdependent.

Eventually, in the most recent works, they lose all connection to the ground and begin to separate from each other; they seem to be floating, or falling. Surprisingly, one senses at this point a kind of lightness and relief, rather than sheer terror and impending doom, as though we are witnessing a slow-motion surrender, letting go of the burden and weight of it all.

Judith Belzer, who was born and raised in a suburb of Chicago, now divides her time between Berkeley, California and a small farm in rural Connecticut. She received a degree in English from Barnard College and studied at the New York Studio School. She is a visiting lecturer in the Department of Visual Art and Environmental Studies at Harvard University.

Way Bay is a sweeping exploration of the creative energies that have emerged from the San Francisco Bay Area over the past two centuries.

Contraption: Rediscovering California Jewish Artists is a group show that presents the work of sixteen California-identified artists of Jewish descent—both historical and living—whose work refers to the machine either literally or metaphorically. Some of the artists are rarely seen now. Among the living artists, there will be large-scale mechanical installations by Bernie Lubell and Sheri Simons, as well as ceramics, drawings, sculpture and paintings by Ned Kahn, Bella Feldman, Howard Fried, and Annabeth Rosen. This original exhibition was co-curated by Chief Curator Renny Pritikin and Mark Dean Johnson, Professor of Art at SFSU.

Guilford College Art Gallery will present paintings by Judith Belzer in an exhibition titled “Canal Zone: Recent Work from the Panama Project,” from August 29 to October 30, 2016.  Thirteen canvases will be displayed in the College’s main gallery in Hege Library, and additional works on paper will be shown in the Robert C. Ketner Vitrines adjacent to the gallery entrance.

Recent work from The Panama Project